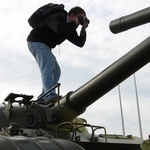 * Why does Galeon depend on GNOME? There should be a GTK+ only version!

First of all, from the very start Galeon has always intended to be a GNOME web browser. If you don't use GNOME, then Galeon probably isn't a very good choice for the time being.

So why lock Galeon into the GNOME environment? There are many advantages to using the existing GNOME libraries. Contrary to what some think, depending on existing libraries to do typical tasks in modern desktop applications is not bloat. In fact, it's the exact opposite of bloat. The bottom line is that implementing our own toolbar, our own configuration mechanism, our own session management, and our own dialogs would be counter-productive.

Galeon relies on many standard GNOME libraries (GTK+, libgnome, libglade, libxml, etc.). Given these requirements, how much would we gain by removing the GNOME dependency? This is not only illogical, but conflicts with some of Galeon's other goals of integrating nicely with the GNOME desktop.

However, if you absolutely don't want to use GNOME, there is now a project known as SkipStone which implements a GTK+-only web browser.