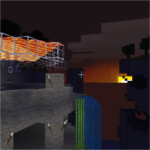 GNU `make' knows how to execute several recipes at once. Normally, `make' will execute only one recipe at a time, waiting for it to finish before executing the next. However, the `-j' or `--jobs' option tells `make' to execute many recipes simultaneously. You can inhibit parallelism in a particular makefile with the `.NOTPARALLEL' pseudo-target (*note Special Built-in Target Names: Special Targets.).

On MS-DOS, the `-j' option has no effect, since that system doesn't support multi-processing.

One unpleasant consequence of running several recipes simultaneously is that output generated by the recipes appears whenever each recipe sends it, so messages from different recipes may be interspersed.

Another problem is that two processes cannot both take input from the same device; so to make sure that only one recipe tries to take input from the terminal at once, `make' will invalidate the standard input streams of all but one running recipe. This means that attempting to read from standard input will usually be a fatal error (a `Broken pipe' signal) for most child processes if there are several.

It is unpredictable which recipe will have a valid standard input stream (which will come from the terminal, or wherever you redirect the standard input of `make'). The first recipe run will always get it first, and the first recipe started after that one finishes will get it next, and so on.

We will change how this aspect of `make' works if we find a better alternative. In the mean time, you should not rely on any recipe using standard input at all if you are using the parallel execution feature; but if you are not using this feature, then standard input works normally in all recipes.

If a recipe fails (is killed by a signal or exits with a nonzero status), and errors are not ignored for that recipe (*note Errors in Recipes: Errors.), the remaining recipe lines to remake the same target will not be run. If a recipe fails and the `-k' or `--keep-going' option was not given (*note Summary of Options: Options Summary.), `make' aborts execution. If make terminates for any reason (including a signal) with child processes running, it waits for them to finish before actually exiting.

When the system is heavily loaded, you will probably want to run fewer jobs than when it is lightly loaded. You can use the `-l' option to tell `make' to limit the number of jobs to run at once, based on the load average. The `-l' or `--max-load' option is followed by a floating-point number. For example,

will not let `make' start more than one job if the load average is above 2.5. The `-l' option with no following number removes the load limit, if one was given with a previous `-l' option.

More precisely, when `make' goes to start up a job, and it already has at least one job running, it checks the current load average; if it is not lower than the limit given with `-l', `make' waits until the load average goes below that limit, or until all the other jobs finish.

By default, there is no load limit.